The Bookwyrm's Review of Priest of Bones by Peter McLean 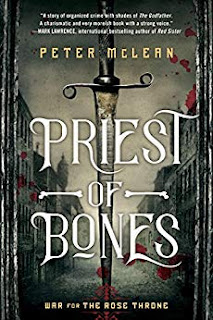 I received an advanced reader copy of this from the publisher, after seeing a post the author had on Facebook. That led me to reading what is possibly my favorite read of the last year, with only Nicholas Eames Kings of the Wyld, Ed McDonald's Blackwing, CT Phipps Wraith Lord and David Oliver's The Great Hearts in the running. This book is just that good.

Several years ago, The Queen in her capitol of Dannsburg, being in a protracted war with a neighboring kingdom, conscripted tens of thousands of men and women into her army, swelling their ranks, and allowing her to defeat her neighboring kingdom. Now, after the final battle of the war at the siege of Abignon, 65,000 trained killers have been released to get home however they can. Among that number is Tomas Piety, soldier, company commander,  priest of the soldier's Goddess, Our Lady of Sorrows, and leader of the Pious Men, Ellinburg's most ruthless gang.

While on the road home to Ellinburg, Tomas and his crew meet Tomas's brother, Jochan, who has a crew of his own. Jochan, a sociopath before the war, left his sanity and humanity back on the walls of Abignon. Joining their forces together,  with Tomas in charge of both groups, they return home to Ellinburg, only to find their aunt Eniad, who they left in charge of their territory, is in a convent, and all their businesses have been taken over by others. Taking back his favorite business, a bar, Tomas and his crew, the new Pious Men, begin the task of retaking what is theirs. Complicating the task is the fact that the new gangs in town are supported by Skanians, a neighboring kingdom, looking to possibly invade with the Kingdom weakened. This includes the Pious Men's enemy gang, the Gutcutters, run by Ma Aditi, just returned from the war herself. Into this chaos, the governor of Ellinburg interjects himself, letting Tomas know in no uncertain terms that he will not appreciate a gang war in the streets, but if he can take his businesses back quietly, well, let the bribes commence. Added into the equation is an uncertain element: a Queen's Man, the mysterious, spy/assassin/hands of the Queen, who is looking to stop the Skanian invasion, with Tomas and the Pious Men's help, whether Tomas wants to or not. What follows is a crazy series of actions, as the Pious Men have to meet the hidden agenda of the Queen's Man, all while taking back what was theirs before the war. The climactic city wide finale is one of the best I've ever seen in a book, and leads to a satisfying conclusion, although some ends refuse to be tied off, leaving you anxious for the next book.

This is definitely what I would consider a character driven book. Tomas Piety and his main lieutenant, Bloody Anne, are a couple of the best written characters I have ever read. Complex, flawed, ruthless, compassionate, they run the gamut of character traits. The concept of the Pious Men, a gang that takes care of the people of their territory, while exploiting them at the same time, is a study in contrasts. The city of Ellinburg is easily the match for cities like Lankhmar and Sanctuary as wretched hives of scum and villainy, all while being places you want to read more about. The antagonists have realistic motivations as well, and this whole book is a grimdark, morally ambiguous gem.

John Lee handles the narration on this one, and as always, he is solid gold. Bringing each character to vivid life, he makes you just want to skip dinner and keep listening. He is actually a selling point to any book he narrates.

Overall, I can't recommend this book highly enough. As I stated previously, this is one of my top 5 reads of the last year, and I anxiously await the second book in the series.