The Bookwyrm's Review of 100 Miles and Vampin by CT Phipps 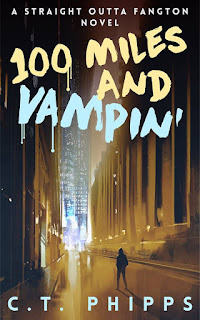 As anyone can tell looking through my blog, I am a big fan of CT Phipps writing. I literally have every book he has written. I make no apologies for thinking he is one of the best fantasy and sci-fi writers working today, either indy or traditional. That being said, I try and be unbiased as possible when writing reviews. That's not too much of an issue with 100 Miles and Vampin, though, since he took the foundation he set with Straight Outta Fangton and expanded and enriched it in just about every way possible, creating a book that is true to what he started, but goes off in directions you just won't expect, creating a fantastic sequel.

Picking up months after the end of Straight Outta Fangton, we find Peter Stone, Iraq War veteran, convenience store clerk, as well as a vampire, settling into his role as Belladix (Supernatural sheriff) of New Detroit, the vampire Mecca created when the vampires bailed out the US government in the crash of 2008 in exchange for recognition and  legal protection. Of course, being the Belladix comes with no perks, being unpaid, and plenty of hassles. Peter's maker Thoth, one of the leaders of New Detroit, tasks Peter with an important assignment: guarding Rebecca Plum, current vampire author sensation, as she visits New Detroit. This is definitely not a job Peter wants, because Rebecca is a wanton feeder, killing everyone she feeds on without exception. So, its on that note Peter starts the job.

Peter also meets Yukio, Rebecca's assistant, who is also her bodyguard. Feeling an instant attraction to the woman, they get a bit distracted later that night. Waking up, Peter finds Yukio gone, but Rebecca is laying around...in multiple pieces! Realizing the political storm that is about to hit, Peter sets out to find who murdered Rebecca and also find Yukio. So starts a wild ride as Peter and several companions, including his zombie roommate David, confront old enemies from Peter's past, and new threats that are political and apocalyptic in nature, leading to a showdown in probably the funniest setting ever, being about as Scooby-Doo as possible. You'll understand when you read it. The final scene is completely is character with the kind of luck Peter has. A new car and explosives are involved, typically for Peter.

As with all his books, the characters are where this book shines. Not that his worldbuilding is bad by any stretch, with New Detroit being a fantastic setting, but the characters and their interactions and dialogue just make you keep wanting to turn the page to see what happens next. Peter's interactions with Thoth are especially great, seeing him as a mentor and a manipulator. As more of the various characters pasts are revealed, it really puts their actions throughout the two books in a new light. Thoth and Lucinda have especially interesting pasts, and you definitely didn't see the connections coming, or the consequences of those connections. The plot moves along at a breakneck pace, and has some great reveals of the hidden world beneath this one. The antagonists are definitely big enough to sell their epic level of menace, being far more powerful than expected. If you read and liked Straight Outta Fangton, you'll really enjoy this one.