The Bookwyrm's Review of Fear The Light by William Massa 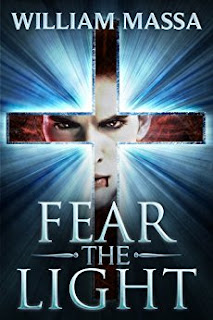 While a lot of the vampire fiction out today is more urban fantasy than Dracula slays, There are still some original stories being told. This happens to be one of them. It's actually a hybrid of a vampire story mixed with a murder mystery, and it will keep you guessing through to the end.

When Dracula awakens to find himself just before sunrise outside staked to a cross with Silver stakes, he realizes his very long unlife is about to end in pain and misery. When his eight progeny come together to determine the new leader of the clan, things definitely don't go as expected. The diverse group, including a renaissance era knight, a 40's movie starlet, an 1800's era Texas Ranger, a teen street thief from the Victorian era and a 70's Hells Angel. AS the group bickers amongst themselves, one by one they are being killed in ever increasingly ingenious ways. Trapped in Dracula's French Chateau, The dwindling survivor's must find a way to either escape or catch the killer before they are all killed. This becomes even more difficult when hired mercenaries arrive at the chateau, fully trained and prepared to kill vampires. When the last vampire is left standing and the villain is revealed, you realize this whole story is about the sins of the past coming back to haunt. Great way to tie off the story!

This is a shorter story, so plot was much more in the forefront than super detailed character building. That being said, you got a good handle on the personalities of the characters, their motivations and the paths they had taken to get to where the story begins. The setting is well described, the action sequences and murders are excellently laid out and executed, The mystery elements are all their too, and William Massa is excellent at building tension and suspense.

Kirby Heyborne's narration was fantastic. He has a softer narrating voice, but he has a wide range of character voices and accents, and has no trouble switching from Hell's angel to Hollywood starlet.His narrative pitch and pacing is excellent as well, and he makes you want to keep listening. He is a very talented actor, having appeared in quite a few movies, tv shows and commercials, and his audiobook work is pretty wide ranging and just excellent.

I think this is the kind of book that will appeal to fans of mysteries, vampire horror or urban fantasy. It has a little bit of everything from those genre's, and stands apart in a world of Twilight clones.