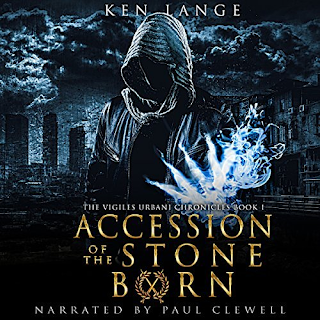 Having read the other series that shares the same universe as this book and really enjoying it, I was understandably excited to try this one out. I am happy to report that this series, parallel to The Warden Global books, is just as well written, with characters just as engaging and with the universe and its magic further expanded.

After 28 years of clandestine work (assassin) for the Department of Defense, Gavin Randle returns home to New Orleans to see his only surviving family, his uncle Andrew. There, he discovers there is a much bigger world than he expected, even as a jet setting fixer. He discovers he is stone born, a type of mage, and that there is a whole counsel that deals with the supernatural worldwide. Gavin is an anomaly, though, as external magic doesn't work on him, as he discovers during an assassination attempt. His skills as an assassin serve him well as he investigates who murdered the last Vigil (basically, the magical sheriff of the region), as he survives assassination attempts and tries to solve her last open case, a bunch of murders tied together over 50 years. He has authority to do this, as he accepts the mantle of being the new Vigil, and bonds with his token of office, a magical Denarius coin with a sentient entity named Kerr in it, with the accumulated knowledge of its previous holders.

While trying to keep his uncle and new friends safe, he must try and discover who is behind the string of murders, which leads to shocking discoveries including a vast conspiracy in the hall of power. There is also the issue of a necromancer raising wraiths to murder his enemies, including Gavin. Gavin, as a new Vigil, also has to deal with the triumvirate in charge of the local counsel area, who don't appreciate what his duties and authority are. Oh, and did I mention that this entire supernatural world is ruled from on high by Lazarus? Yes, the uber-powerful Lazarus from the bible, although his story is a little different here. Chasing down the conspiracy leads Gavin to a final confrontation with his most powerful enemy yet, and its only if he can fully utilize his powers does he stand a chance to defeat them.

This is an excellent example of a book that takes the world set up in another series and uses it as a jumping off point, while making its own mark. The supernatural underworld of a spooky city like New Orleans is not the usual setting for an urban fantasy, but its a great one nonetheless. The characters are rock solid, with Gavin being particularly well written. The plotting is fast paced, and the politics, both mundane and supernatural, flow naturally and consistently throughout.

I had never heard Paul Clewell narrate before, but he did a good job bringing the characters to life. He gave them all distinctive voices, and his narrative pacing was excellent, never dipping into a monotone. all in all, a fine effort.

Any fan of urban fantasy should find something to like in this book. There's magic, intrigue, mystery, murder and some excellent fight scenes. Gavin's mysterious past is also something that drew me to the story as well. Let's just say that he was accomplished at his work.