The Bookwyrm's Review of Shrouds of Darkness by Brock Deskins 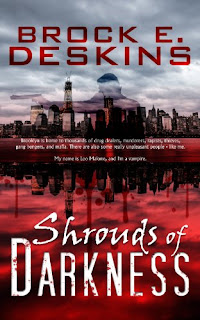 With the slew of vampire urban fantasy that has hit the shelves in recent years, from romance with vampires to gritty urban grimdark, I wasn't sure where this would fit into that group. While the idea of a vampire detective isn't new, Brock Deskins' Leo Malone is definitely a great character who brings an added dimension of humor and determination you don't see in a lot of this type of character.

When a mob accountant is accosted outside his office by a gang of rival thugs, things get hairy, literally, as he turns out to be a werewolf. That's bad, since supernaturals are supposed to keep it hidden, and shredding some gangsters isn't very subtle. The vampire leadership is quite keen and strict about keeping it hidden from the humans.

This brings Leo Malone onto the case when the accountants adult children hire Leo to find out what happened to their father. The case turns out to be much more complicated that its seems, Since it seems there are forces that don't want him found, and will do anything to keep him from being found. Leo's complicated relationship with the vampire Elders isn't helping, as they would rather see him dead if they could than anything else. As he delves further into the disappearance, he discovers a much larger conspiracy that that threatens not only his life but exposure of the supernatural community in general, which could have far reaching consequences for all the supernatural nations.

Like his other books, Shrouds is a character driven book. The urban setting is fun, and you get immersed in it, but the characters are where the action is at, especially Leo. His attitude towards life and the vampire nation in general really make him a sympathetic character. You really root for him, even as he snarks his way from one discovery to the next. The secondary characters are well fleshed out as well, and the plotting if fast paced and never lags.

Steven Jay Cohen does his usual excellent job of bringing the story and characters to life. His Leo voice may be my absolute favorite he does. Just the right amount of snark for the part. His narrative pace is spot on, and smoothly flows throughout the book. He is definitely a reason to consider getting the audio version.