The Bookwyrm's Review of The Great Hearts by David Oliver 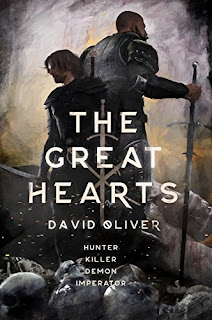 As anyone who's read my reviews knows I am a big fan of audiobooks, and thanks to Audiobookboom.com, which connects reviewers to authors, narrators and publisher looking for honest reviews, it's possible to discover books like The Great Hearts. That's a good thing, since it would be tragic to miss out on stories as good as this.

Callidan Darkheart and his hulking partner Cassius are Imperators, Voice of the Emperor, the hands that solve the Empire's problems which others can't, often painfully and permanently.
They are also Callidan and Cassius, boys from a small village in the mountains, who watched their entire village be tortured and slaughtered by a group of barbarian cannibal demon worshipers bent on summoning their foul master to the realm. Escaping the barbarians and their demon, they swear revenge as only young teens can do. While escaping, they trap their pursuers and manage to have a huge boar kill most of them.

One survived, the tracker, although he was injured. They discover that he only worked for the barbarians, he wasn't a crazy cannibal. They start nursing him back to health so he can help them make it to civilization. During this time, they also encounter a strange creature in the dark one night, and Callidan feeds it. This comes in handy later as they face down a wolf pack, since this creature comes and saves them. It is a giant cat the size of a moose, called a Great Heart, and Callidan feeding it caused it to bond to him. This means he is mentally linked to it, and gains strength, speed, agility, increased healing and other abilities, making him much more than human.

Reaching civilization, they are introduced to the local army commander, who puts the tracker to work training his scouts, and takes the boys under his wing, training them as future officers. This includes training in a martial art from a distant country, which Callidan's abilities really allowed him to excel at. This all comes to an end, though, when a rogue Imperator student comes through the city, with two Imperators on her trail. This leads to a confrontation with the student, who it turns out is possessed by a demon. This confrontation injures Cassius, and outs Callidan's bond to his Great Heart, which forces the Imperators to bring them before the Emperor, who heals Cassius. He also inducts them into his Imperators,  telling them the training will either make them Imperators or kill them.

Thus starts the Imperator training. The sheer difficulty of the training would be hard to describe, and be a huge spoiler. Needless to say, it involves a varied cast of characters, learning the skills it takes to be and Imperator, including statecraft, combat training, diplomacy, assassination, and the basics of magic. They even take a field exercise to mysterious valley which has killed all who have entered it. The students and their Imperator instructor do enter, and discover the lost history of their world, which I can't reveal due to spoilers. They also discover the truth of the worlds magic, all in an exciting climactic battle.

This is all told in flashback form, as we start and continue the story throughout with Callidan and Cassius on various tasks as full fledged, experienced Imperators. This includes trying to track down the demon and his worshippers that killed their village. You also see that Cassius is bonded with a creature from the depths of time, making him a match for anything on the world, if also making him frightening in the extreme. This leaves us waiting for the next book for the story to continue.

I am a huge fan of Callidan and Cassius. They play very well off each other, and are hugely different from teens to adult. You can tell life has really weathered them. They are just so well drawn out, you are really able to get inside their heads. The secondary characters are all equally well drawn out, given three dimensions, with realistic motivations and consistent actions. The format of shifting to flashbacks doesn't work for all authors, but this author does it better than any writer I have ever read. It is done so well, it never feels jarring, and is used with great effect to foreshadow current events. The plotting is fast paced, and definitely qualifies as grimdark for those looking for genre labels, although there is a generous helping of humor to help offset the grim. The action scenes are so well described you would swear you can feel the swish of the blade, the bite of the edge. From the smallest duel to the biggest battle, you feel as though you are right in the middle of the action, blade in hand. You can't ask for much more in a fantasy tale.

The Author self narrates. This is often a hit or miss proposition, but in this case, it's a definite hit. He really brings each character to life, injecting separate personalities into each. He really gets a variety of accents and inflections to differentiate the characters. His narrative pacing is excellent, and you never feel the narration slow down into any sort of monotone.

All told, an excellent effort, one which I heartily recommend. As I've said, I rate this up there with Nicholas Eames' Kings of the Wyld and Ed McDonald's Blackwing as my top fantasy reads/listens in the last 12 months. Do yourself a favor and get a copy.