The Bookwyrm's Review of The Stars Have Eyes: Episode One, "Arrival" by Neven Iliev 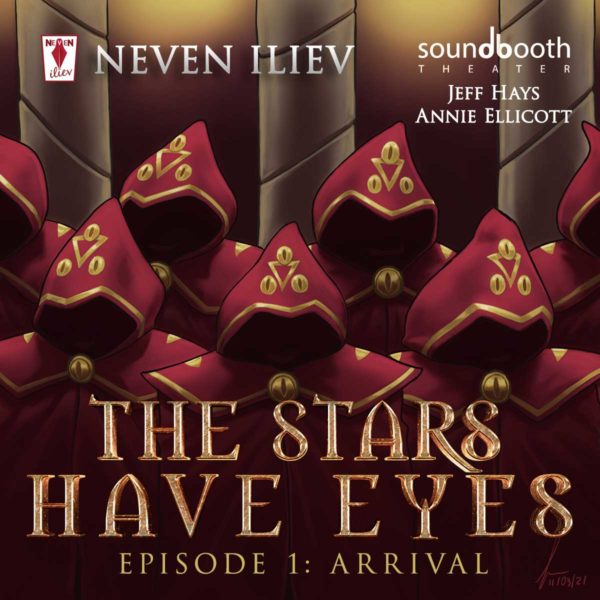 Joe Mulligan is looking for love, companionship, and romance… and that’s what the brochure said he was getting. Unfortunately, The Cult of the Gazing Star has no such thing planned for him. They had to lure a willing sacrifice in somehow, and as has always been the case, those looking for love, companionship, and romance are plentiful. So, having hooked the perfect, gullible, and hopelessly clueless candidate, these fanatics will finally summon the subject of their worship: a terrible being from beyond the veil of reality called Mag’rathlak the Observer. And although this devious cult had no intention of finding Joe a worthy companion, he may have found one all the same…

Being a big fan of Neven Iliev's Everybody Love Large Chests series, I was excited to get a chance to listen to and review The Stars Have Eyes. Hearing that Jeff Hays and the crew at Soundbooth Theater Productions were handling the narration sold me even more, because there is not a finer narration group around. This combination gave me high hopes for the book, and I definitely wasn't disappointed.

The world building is sold, as I'd expect from this author. Set on a planet in the human diaspora, it was obviously colonized by people of British heritage, since the people speak with a British accent and speak British English. This is actually an important detail, since a poorly chosen use of the word "mate" has some funny consequences. There is all the advanced tech you'd imagine, but people still like getting a pint at the local pub, so it has a more realistic feel to it. Immersing yourself in this wold is so easy.

The characters are fun as well. Focusing on Joe in this episode, we get a good look into him. Kind of a goofy romantic, he's not the brightest bulb on the tree, considering he let a cult use him as a potential sacrifice in the hopes they could get him a girlfriend. He's just a lovable goof, and any scene he's in is better, even if ts just laughing at his cluelessness. The other big character, Mag'rathlak the Observer (Maggie for the name pronouncing challenged like Joe), is just your average Class III cosmic entity (somewhere between Cthulhu and Thanos), summoned to this plain by the cult and left to it's own designs. Needing an anchor, it makes the deal with Joe to stay, and takes on a human form it found in Joe's mind to hilarious results. The byplay between Joe and Maggie is hilarious, because he's a bit clueless socially and "she" is just corporeal for the first time in this dimension, so is even more clueless socially than he is, but can blast annoyances out of existence is she chose. How Joe can possibly teach her how humans operate is not a forgone conclusion, and leads to some really hilarious situations.

The narration and voices are mainly performed by Jeff Hays, with Maggie being performed by Annie Ellicott. They both really nail their portrayals, bringing the characters to life, injecting some fun into them. Jeff basically channels his inner Elijah Wood into his voice for Joe, so he comes across as a lovably clueless version of Frodo, as far as voice. The narrative pacing is excellent, and it serves to draw the listener in deeper to the story, This is some of their best work to date.

This was a really fun title to review. With the episodic nature of this overall story, it could have been cut off too soon, or left off at an awkward part. Instead, it hit that sweet spot in the story that had a natural pause, letting the story continue on perfectly in the next episode. I think this series will appeal to any fan of comedic sci-fi, whether it be something like Red Dwarf or the Hitchhikers Guide to the Galaxy. This combo of author and narrators is a must listen, and I highly recommend checking out their other offerings on Soundbooth Theater as well at the link at the top of the page. 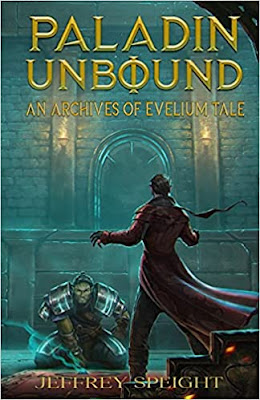 The Bookwyrm's Review of Paladin Unbound by Jeffrey Speight