A Q&A with Amanda K. King and Michael R. Swanson, the writers of the Ismae series. 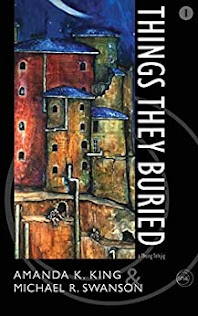 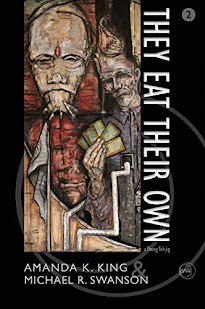 Since I wanted to offer some more content for my reader's, I've decided to try some Q&As with some of my favorite authors. Here's the first, which Amanda and Michael were gracious enough to have with me. I hope you enjoy it as much as I do.

Bookwyrm: What made you both decide to sit down and start writing the world of Ismae? What made you say to yourselves "this is what I want to do"?

Amanda: I express myself better through the written word than spoken—I kind of ramble when I talk—and I’ve always wanted to write fiction professionally. I love creating characters, who become a weird kind of friends, and seeing what they do in different situations. When I worked corporate, I wrote just about everything non-fiction—marketing copy, news articles, training manuals—but never had the chance to write what I wanted to write. So when I left corporate life, we started work on the Ismae stories. We’d been developing the characters and world since 2004 when we ran a persistent gaming world online, so we already had a huge world bible, which made it easy to get started.

Michael: It never occurred to me to ask that. I’ve been involved with writing and world and character building in one form or another most of my life. Were it not for Amanda and the rise of self-publishing I doubt I would have ever taken the initiative to write novels. It’s not an opportunity I foresaw in my life. 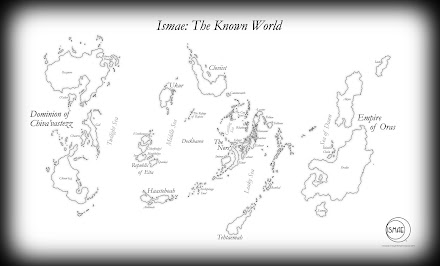 Bookwyrm: Is there a genre you don't write in that you are a fan of, that you might consider writing in one day? If so, which one?

Amanda: Honestly, I don’t read much fantasy. I love watching fantasy TV and movies and RPG gaming, but fantasy books rarely resonate with me. I lean toward horror, science fiction, mysteries, and magical realism. I have several half-started stories in those genres in my notebook, but I’m focused on finishing the Ismae novels before I dive into those.

Michael: I don’t plan on writing in genres other than SFF, but I fully expect you’ll see my love of other genres reflected in our Ismae stories as we progress. 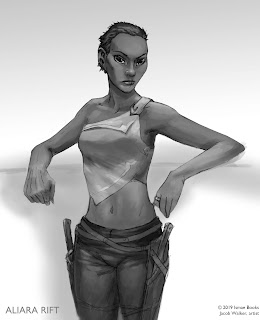 Bookwyrm: Who are some of your favorite writers? Either inspirational or just for entertainment?

Amanda: Wow, that could be a really long list, so I’ll just pick my top five that I read for both entertainment and inspiration: Rex Stout, Raymond Chandler, Patricia Highsmith, Kurt Vonnegut, and Haruki Murakami. Stout can build a character in just one sentence—and it’d be tough to find a better developed relationship than Archie and Nero. Chandler just has this amazing way with the language. Sometimes he goes a little overboard but it’s always a treat. Highsmith has this wonderful understanding of and distaste for human nature that makes all her novels slightly chilling. Vonnegut has a much more affectionate understanding of human nature and presents it with a wonderful sadness and smirk. And Murakami just looks at everything sideways—I never know where he’s going with a story and I’ve learned it’s no use guessing because I’ll always be wrong. (Honorable mentions: John Irving, Bret Easton Ellis, Phillip K. Dick, Jim Thompson, George Alec Effinger, Shirley Jackson, Walter Mosely, Fritz Leiber, Scott Sigler, David Wong, William Goldman, Chuck Palahniuk, Hunter S. Thompson, Agatha Christie, Stephen King, Martin Cruz Smith, and I know I’m leaving out tons of others.) 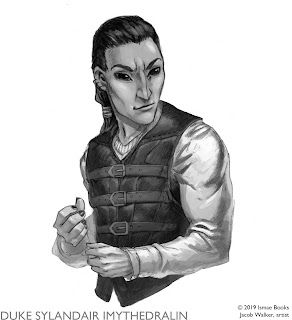 Bookwyrm: And who are some of your favorite characters? What drew you to them?

Amanda: That could take me a week to research and answer, so top three: Archie Goodwin never fails to make me laugh. He’s so wonderfully and unabashedly himself. Re-reading the Wolfe mysteries is comforting for me, like talking to an old friend.

As a young kid, I was nuts about Eilonwy from Lloyd Alexander’s Chronicles of Prydain. Back then, we didn’t have any Hermione Granger types, and Eilonwy was one of the few young female characters with any depth.

When I was a teen, I picked up The Hotel New Hampshire and latched onto the Berry family. Weird, funny, and horrible stuff happens to them, and sometimes they’re strong and bounce back, sometimes they break. Sometimes people look at me like I’m crazy when I describe the novel as being so much like real life—what with motorcycle riding bears, bomb-tossing anarchists, a floating dog, and toilets that flush upwards—but for me life has been that unexpected and strange—you deal with it however you can. Every few years, I read that novel again with fresh eyes and it always says something new to me.

As a child I gravitated toward old wizards; Gandalf, Merlin, and Obi-Wan Kenobi specifically. In the summer of 77—after first seeing A New Hope—my neighborhood friends and I would pretend to be the characters and I always chose to be Ben, even though it meant being cut down by my friend Rick who always demanded to be Darth Vader. Not that I would stick to the scene as written, much to his frustration.

Gandalf entered my life through my mother’s love of Tolkien. She’d buy the calendars when she could—the ones by the Brothers Hildebrandt. Gandalf battling the Balrog was probably my favorite painting from those. Then there were the Rankin & Bass and Bakshi films. By the time I read the books I was hooked on him. Sage protector of all that is precious in life. And he had a cool horse.

Boorman’s Excalibur is where I found a Merlin I could admire. This wasn’t the goofy bumbler from Disney’s The Sword and The Stone, this Merlin was a complicated, brooding man who’d sacrifice love and his own happiness for the good of a kingdom.

On some level I probably gravitated toward this archetype because they were characters on the periphery of life, involved with others only when it had meaning or purpose. I was the only child of very young parents who split up when I was in kindergarten. Before sixth grade I changed schools five times. So, I suppose the outsider/influencer persona resonated with me.

Amanda: And these days he’s cultivating the “crazy old wizard” look to make it complete. 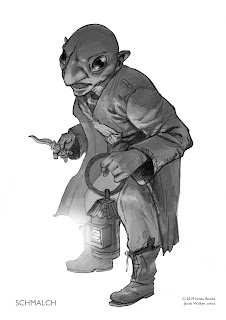 Bookwyrm: Are there any plans to possibly spin off some side characters into their own adventures, like Schmalch? Or maybe a prequel?

Amanda: While I won’t exclude the possibility of a Schmalch-led novel, we don’t currently have one planned—though he and Sviroosa will have meatier roles in the next Syl and Aliara novel.

That said, we absolutely will be spinning off Ismae novels led by characters other than Syl and Aliara. Right now, we’re working on a novel featuring Haus as the protagonist—which will also bring back more of the horror elements from Things They Buried. I love Syl, Aliara, and Schmalch, but it’s been refreshing to step away from their dramas from a whole novel.

Michael: As far as characters from our first two novels specifically, there is and will be short fiction and other novels featuring several of them. That said, there are many more personalities in Ismae than Sylandair, Aliara and Schmalch, expect to meet them in years to come if we are fortunate enough to bring them to you.

Bookwyrm: I've always heard the expression write what you know. How much of you both is in your various characters?

Amanda: We steal a lot of comments, scenarios, and characteristics from real life, so there’s a lot of our own personal experiences in the storytelling even if the setting is extremely different from our own. There are parts of each of us in every one of our lead characters, but none of them is entirely like either of us. Given how nearly broken and unhinged most of our characters can be, I’m not sure how many similarities I want to admit to.

Michael: What she said. 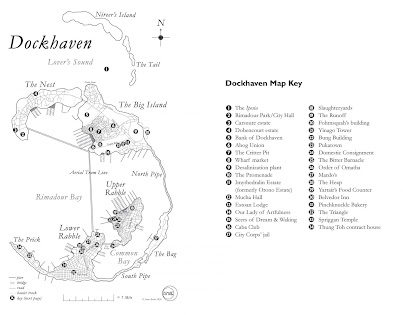 Bookwyrm: I know this question might be controversial, but are there any trends in current SFF you aren't a big fan of? And conversely, trends you are really into.

Amanda: I think the trend I dislike the most is the constant chasing of trends. Maybe we’d sell more copies if we did so, but then I wouldn’t be writing what I want to write, and that was the whole point of starting this to begin with.

Michael: Pandering to the whims of social media and outrage culture. I’m sick of it. It narrows our view of the world and robs us of the joys of genuinely trying to know one another. Us and them mentalities (no matter what their team colors) are to be avoided. That said, I am happy for the side-effect of being exposed to more marginalized voices. Bear in mind, one of my very favorite authors was a gun-toting, cat-loving, misanthropic gay junkie…

Bookwyrm: Finally, so where do you see the series going? Any finite plans for series completion?

Amanda: We have a plan for the end of the Nihal Savesti storyline, but that won’t be the end of the whole Ismae series. We’re looking at the Ismae stories as heroic fiction—each book with a different stand-alone adventure—rather than as epic fiction, so while readers will work their way through multi-book story arcs, the end of each arc won’t mean the end of the characters’ adventures. We’re also working on a second series focused on a different group of characters in a different Ismae locale, but we’d like to close the Nihal storyline before we start publishing that one.

Bookwyrm: Thanks for sharing a bit of yourselves with the rest of us. Hopefully, we'll have more Syl, Aliara, Schmalch and the rest of the gang for years to come.

Michael: Thanks Steve. We appreciate all the support you and our readers have shown us and we’re doing our utmost to bring you as many titles as possible. 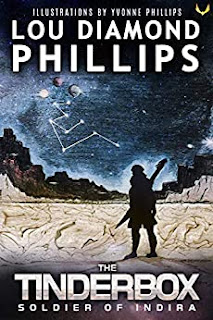 The Bookwyrm's Review of The Tinderbox: Soldier of Indira by Lou Diamond Phillips