The Bookwyrm's Review of Decisively Engaged by C.J. Carella 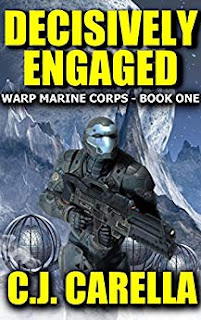 With the wealth of military sci-fi today, it could be easy to get lost in the crowd. With the Warp Marine series, it has such a great premise that this doesn't happen. It's back story is reflected throughout, and its not such a far fetched idea.

In the not too distant future, Earth has it's first alien contact with not just one, but two, alien races, the Risshah and the Hrauwah. The problem with this? They are fighting each other as the come into Earth's area, and the Risshah are genocidal to other species, so decide to clear Earth off while they're at it. Bombing the major cities of the planet, they are only stopped from killing all humans by the Hrauwah destroying their ship.

The US, on the far side of the planet when the bombing started, get a bit less damage than Russia and Asia, and they end up as the representatives of Earth with the Hrauwah. Feeling guilty they led so much destruction to Earth, they help the US jump forward technologically to be able to join galactic society. Its a big, nasty universe, though, so humanity's talent at fighting wars comes in handy, as does humanities unique ability to be much less adversely effected by traveling through Warp space. This allows the formation of the US Warp Marine Corps, which use specialized warp platforms to warp onto enemy ships and take them down from the inside. This is the universe the story starts in, 160+ years after first contact.

After being scapegoated for a battle that went badly, Captain Peter Fromm of the USWMC is reassigned in quiet disgrace to the backwater planet of Jasper Five, a client state of the US. Peter is to command the US embassy Marine detachment, not exactly a glamour role. It's supposed to be a quiet place to keep him out of sight. Unfortunately, it will be anything but. The population on Jasper Five, which has a rigid caste system, is being pushed, backed by the Lanark, another alien species that hates humanity, to rise up, rebel and kill all the alien outsiders. It also doesn't help the ambassador is a coward and not too bright.

As tensions ramp up, Peter is assisted by intel from Heather, a CIA agent working in the embassy staff, who is dedicated to keeping her fellow Americans alive as well. Things blow up when the ambassador insults the queen, which has the effect of turning the population, supported by their army, loose on the outnumbered Americans. Being supported with alien weaponry, what should be an easy to put down rebellion is a fight to death in the vein of Rourke's Drift and Little Bighorn, and if the American's want to avoid annihilation, they're going to have to use every trick in the book and every bit of their cunning to survive. What happens at the end shows that this is just the beginning for humanity, with it's very survival at stake.

The book introduces us to a variety of characters, and they are well written, three dimensional characters. Peter Fromm is the perfect example of this. A dedicated, hard working Marine, he is dumped in the deep end on whats supposed to be a backwater, and rises to the challenge. He makes mistakes, which results in troops dying, but this is written like real military combat, and that is just a fact of war. He is willing to make the hard choices, even knowing his people may die. Heather is another excellent character. Smart, determined, sneaky and cool under pressure, she makes an excellent secret agent. She too comes across as competent and real, someone you can empathize with. There are various enlisted Marines we get to see develop as well, including my favorite, Russell Edison, who is always looking for a side hustle to pad his wallet, but is the guy you definitely want in the foxhole with you. The secondary characters get quite a bit of time as well, and are developed nicely in line with the story.

The world building is excellent as well. The changes to Earth culture based on the traumatic first contact are interesting, with the US going to a much more pragmatic system, with compulsory military service for every citizen, and a much more powerful president than before. The various worlds and polities of aliens are interesting, with some allying with the US, while others would love to see all humans, who they call warp demons, consigned to death. It's a hostile universe the author creates, with wonders side by side with the worst barbarism. It's easy to sink right into the world he created.

Any time you go into a new series, you never know what your going to get. What you get with this series debut is an action packed thrill ride with excellent military action, great character building and an expansive universe with which to expand the story. Tight plotting and pacing are also a plus. Any fan of military sci-fi should find something to enjoy in this story.