The Bookwyrm's Review of Zombie Lake by Javan Bonds 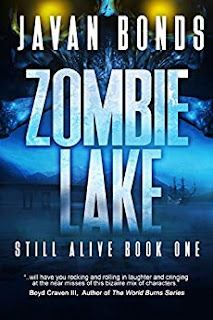 Publisher: If Only I Had A Monkey Publishing

While I have read a bit of zombie fiction over the years, mostly stuff like Peter Clines Ex-Heroes series, I have gained more of an appetite for the genre lately. Zombie Lake, book one of the Still Alive series,  is the latest in the genre I've listened to. It is a bit more comedic than a lot of the more serious series, but it does have its own fairly unique take on the genre.

Mo Collins, twenty-something guy from southern Alabama, is working as a crew member of the Viva Ancora, A working replica of an old caravel sailing ship. While anchored in Mo's hometown, a plague that turns people into naked, blue skinned, nocturnal PV's (short for plague victims, and not zombies, thank you very much) who run around biting and infecting people with 100% turn rate overruns the state. While almost all the crew went into town when the Cora docked, Mo and the ship's cook Crow stayed behind. Now, days later, they still haven't left the boat, living off the ships stores and fish they catch. Realizing they will need some supplies, Mo goes into town to try and find some essentials like medicine. Not surprisingly, the Walgreens has been looted thoroughly. Its while he's in town that Mo meets Smokes, who it turns out knows everything about zombie lore, and immediately he falls in with Mo.

While they try and get some weapons at the local pawn shop, they discover their next survivor, Petunia Sledge, nicknamed Hammer, an army vet that owned the shop. On the way back to the boat, they discover Gene, comic shop owner and geek of the year, as he kills a PV with his prop Wolverine claws. The last survivor they discover is Bradley, a schoolmate of Mo's and a football star who is now a paraplegic in a wheelchair who has a service monkey as his companion.

Returning to the boat, they start making larger plans to raid things like the local Wal-Mart for more supplies. Shockingly, they meet up with more people they know there, including a girl Mo was good friends with. This leads up to Mo connecting with his family again, who have survived and gathered survivors in the rural area they live. It seems as though everything is set up for the long haul until a "military" unit shows up, demanding people turn their guns in and work for them. Shockingly, this isn't welcomed by the locals, and bad things start to happen. When Mo's family's place is burned out, they decide to take the problem head on, and a confrontation takes place with the military unit, with some unexpected results and consequences, leaving the future of the town in doubt.

It's not often you can say a book about the zombie apocalypse is character driven, but with this cast of characters, it couldn't be anything but. The characters are so well created, they could be people you know in real life, with strengths and flaws and crazy personalities. Mo is a great character, but Smokes is the comedy glue that really elevates the story, being the seer in the story. his personality and encyclopedic knowledge of pop culture and zombie lore means he can read where the story is going as if it was a story. Its a very meta kind of characterization, one I'd never seen before, and really makes the story stand out.

The world building is solid as well. You get a real feel for how small town rural Alabama works, and how this zombie outbreak overruns the area. There is surprisingly little zombie confrontations, since the PV's are mostly nocturnal. The PV's are surprisingly different than your run of the mill Walking Dead shambler, in funny and surprising ways.  It's all these little touches that make this book stand out.

I had heard S.W. Salzman narrating on other books, so I had an idea what to expect. I have to admit to surprise on just how good he was on this! I knew he was talented, but his voice work on these very different characters is just outstanding. Male, female, urban, rural, redneck, foreign, it didn't matter, he nailed the voices and brought all the characters to life. His narrative pacing was so spot on that I didn't want to stop listening, it just drew me in. I have to rate this as one of the top five narrations of the last year for me.

While zombie fiction is a relatively new genre for me, Zombie Lake gives me hope that it will become a regular part of my reading rotation. I'm happy to recommend this series, and not just to horror fans. I think it can appeal to fans of multiple genres, including urban fantasy, mysteries, and action thrillers. I don't think you'll be disappointed if you check it out.