The Bookwyrm's Review of The Future of Supervillainy by C.T. Phipps 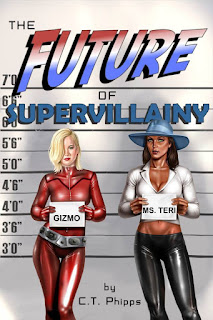 As a huge fan of the Supervillainy series, I was really excited to hear that C.T. Phipps was writing a new volume in the series. When I was given the chance to read an early access copy of The Future of Supervillainy, my inner nerd went into overdrive. Not sure where the series would go after Tournament of Supervillainy, I was pleasantly surprised with the direction it went.

After defeating Entropicus in the Tournament of Eternity, Gary and crew returned to Falconcrest City, to bask in their well earned spoils from the tournament. Living at the Warren Mansion, family home of the Nightwalker, Gary and his family are continuing their life of crime, such as it is. When government agents show up to arrest Gary, threatening his family in the process, Gary decisively and permanently, for the agents at least, ends that threat. Gary then meets John Booth and Mercury, the protagonists from the author's Cthulhu Armageddon series, and finds out the Society of Superheroes has been captured by Tom Terror and P.H.A.N.T.O.M.. When he finds out they were in a previously unknown realm at the center of the Earth, nothing will stop Gary and his crew from going to rescue them.

Arriving in the hidden world, Gary finds that Tom Terror and his minions have taken over a large swath of it, and are trying to take over the last free area. Gary also discovers the underground sun is Ultranian in nature, and the source of all the supers on earth. What follows is a thrill a minute battle though a world Indiana Jones and Jules Verne wouldn't want to try, With dinosaurs, villains and Nazi's, err, P.H.A.N.T.O.M goons trying to stop them at every turn, the final face off has a bunch of twists and turns, including some people from Gary's life he never expected to see again. It also turns out Gary isn't the only one with an Eternity Stone, and this means a shift in the balance of power that may have effects much greater than Gary expected, and he will be changed in so many ways by the end.

This has a really cool adventure story vibe to it, part Indian Jones meets Jules Verne, part Savage Land comics. Gary is his usual wisecracking, self deprecating, stubborn self. You might be  able to complain about character growth, but who wants Gary to grow or get introspective? That would ruin half the fun at least. The rest of the cast of rogues is its usual fun, crazy best. Cindy, aka Red Riding Hood, is still one of my favorite characters. She will literally say anything, and is definitely fun and shocking at every turn. The villain, Tom Terror, is one of his best, being a combo of The Red Skull and Lex Luthor. He comes across with grandiose menace like no other villain in the Garyverse, and he is a legitimate threat at all times to anyone who gets in his way. The new setting of the inner world is very Verneesque, but with touches only C.T. Phipps could come up with. All told, this is one of my favorite entries in what is one of my favorite series. I cant recommend it highly enough when its published.