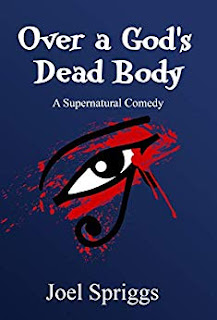 With the trend of urban fantasy diversifying from the wizard PI trope, Over a God's Dead Body takes it even further. With a mixture of humor, various mythological pantheons and magic, it is a true treat for any fan of the genre.

When the male gym professor at Baldur College is caught in a compromising position on the 50 yard line of the college football field with a creature that shouldn't exist, in this case a young sasquatch, things at the college just start to go haywire. Soon after, Esme, one of the college's IT techs, discovers the college has a department of paranormal studies. Asking her twin brother Jake, the schools librarian, about it, she finds he doesn't know anything about it either. This is the start of the crazy twists this story takes, as the twins find out exactly what the school is all about.

Meanwhile, we meet Loki, Norse god of mischief,  who it turns out has been working for Seth, the Egyptian god of chaos, for centuries, ever since he freed Loki from his imprisonment. Loki has acted as his "problem solver", and it turns out, he is not as big a jerk as the myths make him out to be. It also turns out, he has an unusual connection to Esme and Jake, and that connection will have long term effects for them all. That's because Seth is after something that will allow him world domination (at least he thinks so) and he thinks its at Baldur College, and he has sent Loki to locate it.

What follows is one of the craziest, most hilarious set of events I have ever read. I mean, spit coffee through your nose laughing moments throughout. From magic flying brooms, zombie ducks, a dwarf punk drummer, a giant purple dinosaur and magically controlled wasps to the Voodoo soccer mom looking to get some payback on Kyle, the laughs never cease. Oh my lord,  Kyle. What an amazingly funny character, who so much coincidence swirls around, and who's backstory, as it is revealed, is both horrifying an brilliantly funny. So much of the story spins around Kyle, even in subtle ways, that just end hilariously. This all leads up to a fateful confrontation with the various power groups at the college, which could have tragic consequences for the rest of the world, which is much more important to the multiverse than you'd expect.

As a huge fan of comedic fantasy, this was a real treat. The characters, especially Loki, Esme, Jake and Kyle, are really engaging, and their character arcs are a lot of fun, especially as more secrets are revealed. The secondary characters are given a lot to work with as well, and the villain, such as he is, has a realistic rationale behind his actions. The setting and worldbuilding are really well done, with Baldur College and the surrounding town being well thought out and brought to life. Definitely not the usual grimy Chicago, New York or LA setting. All in all, its a very satisfying mashup of urban fantasy with ancient mythology, one I'd recommend you check out for yourself.

As far as audiobook narration, Daniel Vuillaume handles those duties admirably. I had never heard his work before, but I must say I was impressed. He really brought the characters to life. His use of tone, pitch, accent and speech pacing was excellent, really differentiating the various characters. His Kyle voice had me laughing throughout, as did his voices for the Loa and various other gods. Just excellent work I'd highly recommend.