The Bookwyrm's Review of Smoke Rising by Craig Halloran 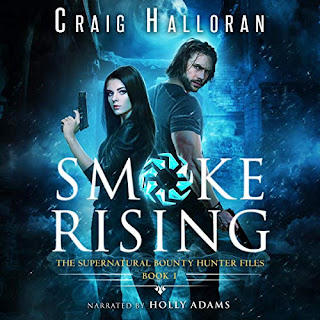 I read this previously when I got the paper copy, but I didn't yet have a blog, so I never reviewed it on here. With the recent release of the Audiobook, I thought a listen and review was in order.

Sidney Shaw, an up and comer in the FBI, has just been handed her dream assignment. Known as a troubleshooter, she usually gets cases that are outside the norm from the average agents experience. IN this case, she has been given a case on the Black Slate, the secret most wanted list for criminals who don't officially exist. No one has ever been able to run Sidney's new target to ground. In fact, several agent have disappeared or died trying. To help her, Sidney's superiors have given her a wild card: John Smoke. Ex Navy SEAL, ex cop, bounty hunter and now convicted felon after he maimed one of his bounties, Smoke is looking at his sentence being commuted if they can run this bounty down.

The strong willed Shaw immediately butts heads with the irreverent Smoke, especially since Smoke has no regard for her authority. Running afoul of both internal FBI politics and the corrupt powers of DC, Shaw and Smoke run down their target, only to discover that he is like nothing they have ever encountered before, and that there is so much more below the surface of society than they ever imagined, with repercussions that could rock society if they were ever known.

While there is strong world building and plotting, The characters are where this story really shines. Sidney and Smoke are polar opposites in temperament. She is controlled and calculating, he is brash and reckless. They are both strong, intelligent characters, and that tension between them really moves the story. The secondary characters are well written as well, and the villain, while being fairly typical of the genre, fits into the story well. All in all, there's something in the story for any fan of urban fantasy.

The audio narration is handled by the talented Holly Adams, who I consider to be one of the top five narrators working today. She is excellent creating unique voices for the characters, both male and female, and has an amazing range of tones an pitches to differentiate them. She can also handle any accent, which makes the characterizations even more diverse. Her narrative pacing is fantastic, and you just get right into the flow of  her narration. This is definitely one of my favorites of her work. Definitely in my top 10 audiobooks of 2018.