The Bookwyrm's review of Tournament of Supervillainy by C. T. Phipps 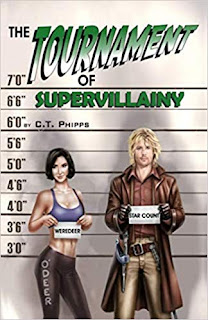 I discovered C. T. Phipps when I came across the first book in this series, The Rules of Supervillainy. I was instantly enthralled with the story of a man given the powers of the city's greatest hero, and deciding heroics is for chumps, I'll be a villain instead and make some money! That appealed to me, in the same way Ben Bequer's Blackjack books caught my attention. To say I was anticipating book five is an understatement, and I was not disappointed with the final result.

Through the first four books, Gary Karkofsky, aka. Merciless, the Villain Without Mercy (tm), has had some definite highs and lows, but has always seemed to always just scrape by. Finally, after defeating his nemesis Merciful, his alternate universe doppelganger, along with President Omega, Merciless just wants to settle down to some quality low key supervillainy with his newly re-souled wife Mandy, his other wife Cindy, the villain known as Red Riding Hood, and their daughter . Instead, he is offered a chance to compete in the Primal Fighting Tournament (think Mortal Kombat), with the chance to win the ultimate prize: one unlimited wish.

Realizing there are definitely entities he doesn't want with that wish, Gary, along with his crew, enter the Tournament. Upon arriving at the interdimensional equivalent of Han's Island from Enter the Dragon, Gary and company meet some of the other contestants. Included in this group are Jane Doe, Weredeer shaman (I Was A Teenage Weredeer), Cassius Mass, former Fire Count in the Archduchy of Crius (Lucifer's Star), and Agent G, cyborg assassin (Agent G series). All these characters belong in other worlds in the author's various series, crossed over for this event. All these characters are trying to keep the grand prize out of the hands of Entropicus, the ender of worlds, who just wants to destroy the universe.

As the tournament progresses, Gary discovers the stakes are even higher than he knew, since there are cosmic entities much higher on the food chain than he is with a vested stake in the results. Gary will have to go through enemies and allies alike to be able to take the ultimate prize, and the ending is nothing like he expected, with a twist you just won't see coming. The revelations for some aspects of his personal life are also completely shocking.

Like his other books, which all have impressive worldbuilding and plotting, the characters are where this series really shines. From the impressive development of Gary and the rest of his crew, to the various villains and secondary characters, C. T. Phipps lavishes attention on the smallest character details, and you really get into the heads of the various characters. This is just one of those series that gets better with every installment. If you are like me, you will definitely be anticipating the next book!

Now that I have finished the audio version of the book, I have to say this is probably my favorite bit of work that Jeffrey Kafer has ever worked on. He really brought his "A" game, infusing life into already well drawn characters to create something special. He even got to add his own forward to the audiobook, explaining their process developing these books in a hilarious way. It shows how the team of Phipps and Kafer work so well together. I can't recommend the audio version of this book highly enough!