The Bookwyrm's Review of Two Faced: An Urban Fantasy Adventure by James Hunter and Eden Hudson. 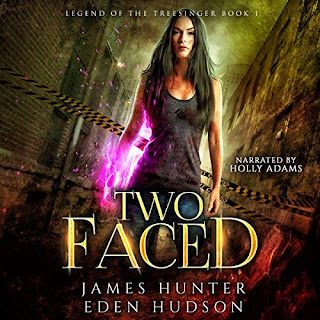 Series: Legend of the Treesinger, Book 1

Being a huge fan of James Hunter's Yancy Lazarus books, when I heard he was spinning the characters in his novel Wendigo Rising off into their own series, I was justifiably excited. When I heard the audio version was being narrated by one of my favorite narrators, Holly Adams, I was sold on the spot. After listening to it, I can tell you that my expectations were not only met, but exceeded in every way.

Winona Treesinger, princess of the Chiatonka (Sasquatches) near Missoula,  Montana, is unhappy with her role in life. After the tribe was betrayed by one of its own, who happened to be her betrothed, Winona is upset at the Elder council's ruling that the Chiatonka must stay separate at all costs from the little brothers (humans). After she and her father helped Yancy Lazarus, human mage, defeat her betrothed and his evil human allies, Winona was convinced humans were unprepared for dealing with the supernatural, and that the Chiatonka should help, as they did in the past. This leads her to start patrolling outside their forest heart home, and where the trouble begins.

Coming across a trail of something foul, Winona follows the trail and comes across a police car. Seeing the police have followed the trail, she continues the chase and comes across Detective Chris Fuller as he fights for his life against some unknown supernatural entity.  Winona charges in to save him, and fights the creature to a stand still, taking many wounds herself. The creature escapes, and Winona brings Chris to her village, against the rules as that may be, and treats him. Being chastised for it by the Elders, she is told to erase his memory and return him to the human world. Defying this edict, she steals a talisman that will allow her to change shape into a human and goes back with Chris to help hunt the monster.

As Winona helps Chris in the guise of a native American shaman psychic, people all over town are turning up dead. As they investigate, a disturbing pattern emerges as to the  motive behind the murders, and to the nature of the creature committing them. The victims may not be so innocent after all, and the killer may be more than it seems. As the chase continues, it also comes closer and closer to Chris's life, and violently intrudes on the life he has made for himself in Missoula. This all leads to the climactic final scene where Winona and Chris face off against a monster that may not have been the crazed killing machine they expected it to be. Can Winona stop the monster and find redemption with her clan? Well, you need to read or listen to it to find out!

Like all of James Hunter's books, and now with Eden Hudson, this is a very character driven story. Winona and Chris are excellent protagonists, playing well off of each other, especially as their cultures are so very different. Their species are so different in the way they look at life, its amazing they can work together at all, but they did, quite effectively. The politics of Chris's office, reeling from the revelations in Wendigo Rising, where the police were involved in the crimes of Winona's betrothed and his human accomplices, makes it a volatile environment, especially as Winona is no cop, but he needs her help to find the killer. The side characters are well written and feel like real people you would meet in everyday life. Even the antagonist has motivations that will surprise. The setting is well described, and you get a  real feeling of being in the scene. Definitely strong worldbuilding.

The narration was handled by one of my favorite narrators, Holly Adams. She is such a talented voice actress, being able to do a huge variety of voices and accents. She has excellent pacing, and her narration never lags or bogs down in a monotone. She adds gravitas to Winona especially, and this may be my favorite character she has ever voiced. I can't recommend the audio version enough. In fact, any fan of urban fantasy should run out and get a copy of Two Faced now.