The Bookwyrm's Review of Morningwood by Nenen Iliev 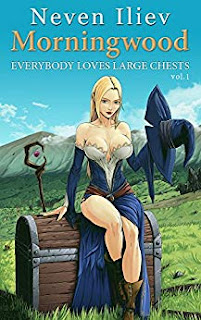 When I first saw this, I thought it was just a parody of the usual LitRPG fare. While it is hilarious, it actually is a fairly serious look at the tropes of LitRPG, and I found it to be exceptionally entertaining and well written, with a unique MC and some fun secondary characters. It is also very adult.

When a low level hero enters the dungeon, he expects to fight the usual giant rats and poisonous mushrooms, that sort of low level thing. When the latest hero goes through the usual mobs of low level monsters, he finds a tasty looking chest just waiting for him to open! Score! Well, until the chest eats him, that is, since the newbie area of the dungeon has started spawning Mimics! Mimics are monsters that are shaped like treasure chests, and then sprout grabbing tongues and teeth when opened. Usually they are a lower level nuisance, although in this case, something weird happens. The Mimic, basically a mindless monster, starts leveling up, including intelligence.

So starts the mimic's rise to a monster of menace, as he continues to level up, eating one adventurer after another. As he levels up, he gains a new ability: Warlock, and eventually levels up enough to summon demons. and with this new ability, the story really takes off, as he summons his first demon, a succubus he calls Snack (the reason for this is hilarious). From there, its off to the wider world, as they start a series of improbable adventures, adding a new companion, and altering the fabric of the kingdom forever with their actions!

You would think a book starring a barely sentient chest shaped monster wouldn't be character driven, and in that, you'd be wrong. Being inside the Mimic's head is a hilarious experience, as it goes from just animal cunning to being a genius for its kind, which is about the level of a box of rocks. His companions, Snack and Arms, are hilarious too, and their interactions really help sell the story. The setting is well thought out, and you get a real sense of being in the story. Considering the story takes place mostly in a dungeon and a forest, its very well laid out. Without becoming a complete satire, it does have some fun with the common LitRPG tropes, and definitely has some very risqué adult content. Definitely something a fan of Lit RPG or comedic fantasy should enjoy.

The narration is handled by the talented Jeff Hays, in what I consider to be some of his best work. His voice work for the various characters is so varied, and really brings each character to life. His narrative pacing is some of the best in the business, and it never lags a bit. Definitely a reason to get the audiobook.