The Bookwyrm's Review of Shattered Dreams by Ulff Lehmann 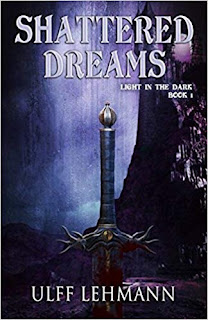 This is one of those book I had on my TBR pile for a while, but just had trouble getting to it. Finally, I decided to read it, and life kept intruding, and it took way to long to finish. Not because it was bad or uninteresting, because that's not the case, just life kept interfering. Having finished it, I can say that this grimdark gem was definitely worth the time put into reading it.

The story starts with two children who chase their dog who runs off into the Woods of Gathran, the old home of the vanished elves. Proceeding deeper into the forest, they come across an ancient site of magic, where something that has been long held is now stirring. Unfortunately for them, their being children isn't protection against the evil happening their, and this being grimdark, you can guess what happens.

We then come across Drangar Rallgon in a small village, where he lives as a shepard. After a run in with a spoiled noble which leaves the noble dead, he heads off to parts unknown to escape the unfair fate that would await him if he stayed. Unfortunately, he is ambushed and captured on the road, where his captors intend to use him in a demonic sacrifice. He is mortally wounded in the sacrifice, which is interrupted by Kildanor, a Chosen of Lesanagh, the banned god of the sun and war He has abilities well above those of mortal men, and manages to stop the demonologists before they complete their ritual.
This is where the story really takes off, as they return to the city of Dunthiochagh, which is ruled by Baron Duasonh, a just ruler, often at odds with the weak, corrupt king in the capital city of Harrail. Drangar is placed in a room as they await his death from his wounds. Meanwhile, something that hasn't been seen in over a hundred years has occurred. A young Phoenix wizard named Ealisaid wakens from a magically induced sleep that was supposed to last two weeks. Instead, it has lasted over a hundred years, and her order has been destroyed. Confused and thinking what she is seeing is an illusion tricking her by one of her colleagues, she lashes out with her magic, destroying two building and killing a dozen people. Kildanor, the last person to face a Phoenix wizard, stops her before she can bring down more destruction, and she ends up in the dungeon. While in the dungeon, she manages to help bring Drangar back to life with Kildanor's help.

All this happens as the Baron's cousin betrays them all, raising a coup, and they find out he has set up the kingdom to fall to their northern neighbors. The coup is put down at heavy cost, but the capital is invaded and the king captured. This all leads to a wild series of events, as Drangar is brought back to life, and they discover their is a conspiracy much deeper than suspected. As the invading army approaches the Baron's city, a lone elf has returned from their exile to try and fix what his people caused by leaving the forbidden demon summoning texts in their forest home when they left. They seem to have some tie in to what is going on, and Drangar finds out he is part of a conspiracy he could never have imagined, as his past comes back to haunt him. We are left at the end with the Dunthiochagh surrounded by an invading army, ready to strike, but with the defenders having some aces up their sleeves, including the freed wizard Ealisaid, who has found a reason to live in this strange new world.

While the book has some excellent world building and plotting that really doesn't lag, the characters are where this book shines! Drangar was my particular favorite, haunted by memories of atrocities and failures to go along with his successes. He is haunted by a force within him, struggling to be released. The rest of the cast also has attention lavished on them, so even minor characters resonate in the reader's mind. The plotting is solid, with the second two thirds really taking off and running full tilt. There are lots of dark moments throughout, with humor leavened in to keep it from becoming a grim slog, which is an excellent approach to grimdark writing.  The magic is limited to a few people, since the order of wizards was put down, leaving priests and chosen as the only magic users in everyday life. The backstory is deep too, which is a good, often overlooked touch that I appreciated.

Is the book perfect? No. The author does give into the temptation to use odd, hard to pronounce names, which is off putting to some readers. Of course, my favorite book series, Mark Barnes Echoes of Empire trilogy, is the king of weird names series, so it didn't put me off. I hope to have an audio version one day to see if the voices in my head pronounce the names the same as the author.  Overall, I can't recommend this book highly enough, and its mix politics, danger, adventure and grimdark evil should resonate with a lot of readers.