The Bookwyrm's Review of Bad World 2: To Kill An Archangel by Curtis Lawson 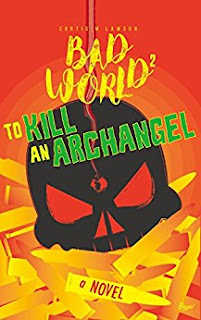 Being a huge fan of the first book in this series, It's a Bad, Bad, Bad, Bad World, I was justifiably excited to see if the author could top his previous effort, or suffer the dreaded sophomore slump. I was happy to discover this topped Bad World 1 in every way. More action, faster pacing, and the occult elements are just so much more intense!

Five years after the end of book one, the various characters are living much different lives. Marcus, the cop's son saved of a wasting disease by the Fangs of Wallachia is a street kid, living with his gang. Cora, who's mom was murdered by the assassin nun, is living with yet another set of foster parents. The Rhodesian is taking contracts guarding high value shipments. Marcus and the Rhodesian are still tied in to daggers, which they get visions of what the current wielder is using them for: murder.  This is where the story starts, and the wild ride begins. Marcus and the Rhodesian are now searching for the daggers, which are drawing them towards them, because the entity that is actually the source of the Fang's power, the Archangel Samael, is about to be released if the Rhodesian can't do something to stop it. Meanwhile, a new murder nun has been assigned to track down and kill all those who know about the daggers and retrieve them. She is even scarier than the first one!

The story proceeds at breakneck speed as Marcus, the Rhodesian and the nun all search for the Fangs, and the Rhodesian and Marcus end up in Rome, trying to find something that can destroy the Fangs once and for all. They even meet a famous person who turns out to be much more than he seems and gives the Rhodesian all he can handle in combat! Meanwhile, back in America, the Nun is on the trail of Cora, who has a destiny even she could have never imagined. It all ends in a huge climactic way that has terrible consequences for the world to come!

Characters. That is the true strength of this book. Yes, the plot is fast paced, the occult elements are interesting and the setting is so well drawn you feel as though you are walking the halls of the Vatican yourself. That being said, the story of Marcus, the Rhodesian and Cora are what sells this story. Whether it being Marcus fighting the effects of wielding the Fangs, the Rhodesian finding a bit of humanity after a life of tragedy and blood, or Cora finally finding a measure of peace after a life of turmoil, you really become invested in them. You hope Marcus can overcome the call, the need for violence and death the Fangs call out to him for. You hope the Rhodesian can find peace in a life that has only known war from such a young age. You hope the worst Cora has to worry about is if that boy at school really likes her. Unfortunately, you know something else is probably going to occur, and that's what makes it so interesting and engaging.

The ending made it clear that there will be a third book. it ended on a satisfying note, and hints at an even crazier third book, and I for one can't wait. I can't even compare this series to any other, since it has elements of horror, thrillers and urban fantasy. I can't recommend this series highly enough!