The Bookwyrm's Review of Gods of Color by CH Baum 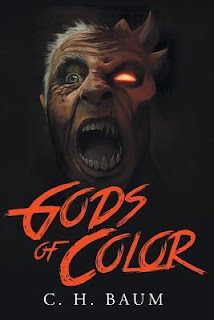 With the trend right now toward Prose Grimdark, led by writers like Joe Abercrombie, Mark Lawrence and George RR Martin, this is a nice change of pace. It is a much more in your face, meat and potatoes kind of Grimdark, more like a knife to the kidneys than a speech and a battle death.

In a world of warriors and magic, Tensions are running high. In the land of Fast, a City-State, Klex, an assassin working for the evil mage Paegus, assassinates Fast's Yellow Seer just after he prophesies that Blue Magic, the most powerful of the 7 colors of magic, will return, and only a select, vaguely defined group can defeat the rising evil. He escapes and rides to get the message back to his master and claim his evil reward.

In the City-State of Ham, The Cities' own Yellow Seer gets the same prophesy, and the king dispatches a team of mages and warriors from his Color Guard to track down Klex and stop him from getting Paegus the message, possibly starting an Armageddon level event! The Warrior team is led by Diana, the Crown Princess of Ham and a Red warrior of renown. The party also includes Peter and Bon, both red warriors (elite warriors), as well as a variety of other warriors of the various color groups (colors denoting specialty, like orange for demolition, green for archers, brown for defensive engineering). The mage group includes Logan and Max, red mages (teleporters) as well a variety of other color mages (orange for fire, green for nature, brown for shields). The warriors track during the day, the mages at night, since the mages channel moonlight for their magic.

This starts an epic, dark adventure, as the Color Guard of Ham tries to head off Klex and stop Paegus's evil plans before they come to fruition. Along the way they will lose members of their party to death and other duty, pick up unexpected allies, and be tested in ways they never expected. In fact, another prophesy foretells that specific members of the party wont survive, and they will have to deal with the repercussions of that as well. Some of the mission will end in success, and some will seem to end in failure. With gods in the mix influencing events, nothing is ever truly what it seems. Some of the team, such as Diana, Peter and Logan, will suffer losses that are much more of a burden than they should have to handle.

In the City of Fast, the situation is a complete mess, as the king is a wastrel and has no interest in ruling justly, just in enriching himself. The city is rife for civil war, and has nothing to offer Ham in support against Paegus. In fact, there are conspiracies within conspiracies in Fast, and you can't tell who is trustworthy. The skills of the Color Guard team are put to the ultimate test in Fast and the Island city of Limala, with the fate of the world resting on what they accomplish.

This book was such a nice change of pace from the overly complicated dark fantasy and Grimdark that is the current trend now. It has a really solid plot, without a bunch of side branches and distractions. The world is well designed and described, and you get a real sense for the look and feel of the world. You can almost feel the nasty swamp of the Rot, the scent of rotting vegetation, of disease and decay. That's just an example. Great setting that one was, and there are so many more.

The magic was creative, each mage focusing on the color they can sense and perfecting its use, although there are a rare few like Logan who can sense and use all the colors, although his red mastery is best. I always like magic that allows for teleporting, so this one was fun, especially since Logan is a lead protagonist. The two evil magics, purple and blue, are suitably awful for a Grimdark story. The magic is a true strength of the story.

With all the good, there was only one minor issues. There were a few of repetitive phrases used in successive paragraphs that just seemed superfluous. Again, this is a minor issue, but may be something the author might want to address if he decides to make this into an audio book.

Other than that, no complaints, and this issue will not reduce your reading enjoyment at all. All in all, a very good effort on a debut novel, and I cant wait to see where the author takes this story in the next book.