A Review of The Statement of Andrew Doran by Matthew Davenport 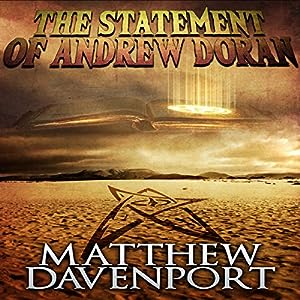 
I had a friend recommend this author as someone to watch. After listening to this, I wholeheartedly agree! In a landscape filled with Dresden Files clones, someone willing to look at urban fantasy more like Brian Lumley is a refreshing change of pace. Moving the story back to WW2 era Europe helps give the story a flavor all its own.


Andrew Doran is an Archaeologist, a minor mage and former instructor at Misketonic University. He is called in by the University's Dean, since it seems the English translation of the Necronomicon has been stolen by the Nazis and taken back to Germany, to have its secrets unlocked by the Thule Society. Well, as much as Andrew hates the Dean, he knows that those evil spells in the hands of madmen bent on world conquest is bad. Traveling to Nazi occupied France, Andrew is connected up with some members of the French Resistance, including their beautiful leader. They escape the Nazis in France to travel to Switzerland, where they can find a source who can point them to the Necronomicon's location. What they find is a twisted nightmare that almost kills them, although they do find the information they need.

They are captured by the Germans, though, and are brought into Germany in chains. However, you cant keep a hero down, and in a scene reminiscent of the truck chase and fight scene in Raiders of the Lost Ark, they manage to escape, and make their way to Berlin where the book is being kept. What follows after they arrive is such a wild scene of chaos, dark magic, harrowing chases, necromantic rituals and discovery about the true nature of his ally. The ending sets up more books in the series, but it is a stand alone. A very satisfying ending with a great twist you won's see coming.

I was impressed with the world building in this book. It is obvious the author researched the era thoroughly, and is also familiar with Lovecraft's Cthulhu mythos. The setting is very natural, and you get a real sense of being right in the thick of the action, in a WW2 era Europe. The hopelessness and despair, the suspicion and terror they lived through, as well as the otherworldly threats, really give it a palpable sense of tension, dread and menace.

The characters are top notch, with Andrew Doran being conflicted about his own power, and the accessibility of powers better left unknown by man, but knowing its better to use the power for good than let the bad guys win the day. His allies are well fleshed out and described, and are believable in both their motivations and actions. The villains are especially fun, reminding me most of the Nazi's from the aforementioned Raiders of the Lost Ark. We know what their motivations are, and its very easy to loathe them. So, good job with the villains as well, even the surprise villain, who shall remain nameless.
As far as narration, Shaun Toole is effective. He really nails the main character, but did seem to struggle a bit with accents. That being said, the narration was smooth, and it is very listenable. I wouldn't let a minor quibble keep you from listening to it. Again, I highly recommend this book.
All in all, I highly recommend this book to anyone looking for a change of pace from the Dresden clones. Its a great combo of urban fantasy and a period thriller. I am very excited to see where the next book goes.