A review of The Science of Supervillainy by CT Phipps. 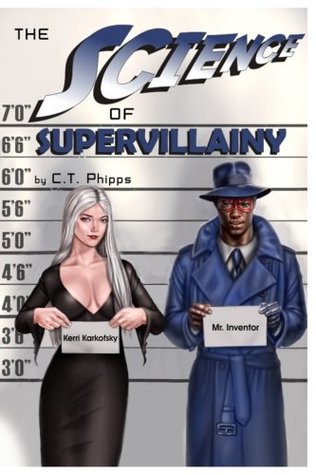 
In which Gary, aka Merciless, the Supervillain Without Mercy™ struggles to defeat his arch enemy, Other Gary, aka Merciful.Thats right, Other Gary is back, and more Bat*** crazy and powerful than ever. At the end of the last book, Gary had dealt President Omega and Other Gary a setback. As this book starts, Gary and his team, including his henchmen (Henchpeople?) Red Riding Hood and El Diablo, as well as his vampire wife Mandy and ex fiance Ultragirl are attacking the presidents forces to try and stop President Omegas planned apocalyptic destruction of a large chunk of the worlds population. Just when they think they've won, things go pear shaped in a hurry!

Captured, brainwashed and imprisoned in what basically boils down to Pleasantville by other Gary, Gary and Mandy finally escape after 5 years with the help of Night Girl, another Cloak of Death bearer. Things have gone decidedly bad in Falconcrest City, with all the clean air, water, high tech readily available and air of happiness now found there, all for the cheap cost of being ruled by a dictatorship of Merciful and the world's other superheroes. Its up to Gary and his allies, including some new ones like Mr. Inventor, a former love interest of both Red Riding Hood and Night Girl, to stop other Gary from destroying the world and replacing it with his warped version of the world. Oh, and did I mention that Gary finds out about his...well, nope, that would be a spoiler. Suffice it to say, Gary has a lot of surprises awaiting him in his quest to stop Other Gary. Lives will be lost, relationships altered forever, and Gary will have to determine what path he truly want to follow, leading up to the climactic final boss battle with Other Gary!

As always, CT Phipps, while writing a story about Supers, really writes about people, characters you can relate to, even if they have a warped perspective. They really ring true to the reader/listener, having understandable motivations, even if they are, as Death calls it, alternatively sane. You can really empathize with Gary, which is strange, since he IS a sociopath. The new characters are a blast, especially Gizmo. She brings real insight into the various characters. I thought it was also fun that Gary's niece basically becomes Jubilee from the X Men. Same powers, if that's what you can call them, although she is much better at it than Jubilee.

The level of snark and humor in this one, especially with the level of violence and mayhem, really helped lighten the mood. Constant pop culture references to various geek chic things including Star Wars and Trek, various anime, D&D, comics and a slew of others are a treat for geek in all of us. I will be upfront, I had to agree with Gary's opininon of Rogue One in this one, not Red Riding Hood's, the exact opposite of Secrets of Supervillainy, where I agreed with Red's opinion over Gary's about Star Wars episode Seven. This is the kind of existential dialogue you can expect from this book. It is a geeks dream come true with the references! I love that the author has the characters reference his other book series, such as gary reading Cthulhu Armageddon while imprisoned, or referencing Straight Outta Fangton as the newest Vampire Chic culture. Not many other authors have the huzzpah to go all self reference, especially in such a funny way! He even references some other author's work, in particular Jim Bernheimer's D-List Supervillain protagonist, an alternate version in their world called MechaniCarl, Carl Stringel. Funny stuff if your in on the joke.

What can I say about the narration? It is top notch as always, Jefferey Kafer really being on his game. His various voices, especially Red Riding Hood and Gizmo, are fantastic, and his narrative pacing is excellent. He really helps bring the story to life! He is now my most collected narrator, having 30 of his books in my collection! That should tell you how much I like his work.

All in all, this feels like the strongest effort in the series, and does a great job of tying off loose plot threads. The author could stop writing these if he wanted to, having tied everything up, but I've heard there are more to come! Authors should read this series to see how to complete a plot arc without leaving loose ends or rushing things. All in all, one of my favorite listens this year. 6 stars!!
Posted by The BookWyrm at 12:11 PM