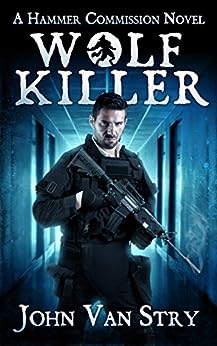 Publisher: Self Published, Available through Amazon


I was already a big fan of John Van Stry's writing from His Portals of Infinity books. When I had the chance to review his latest release on Audible, The Wolf killer, from his Hammer Commission series, I jumped at the chance. While this is book two in the series, you can easily pick up the story from the start. With that, heres the review.

Imagine if the things that go bump in the night really existed. Who would take out the evil nasty Demons, Devils, Fae and monsters? Well, The Vatican has a secret team of monster hunters called the Hammmer Commission, chartered through Interpol, for just such a task. Mark is their leading agent and after a mission goes bad, he is lent to the FBI to help train their monster hunting teams. At the same time, a seriously twisted werewolf is torturing and killing women in Virginia, and the team is sent to investigate. What they find is horrific in the extreme, and only the help of the local Weres and Mark's wife, a WereCougar, do they manage to bring him down and stop the cause of his rampage. As Mark says, they may be monsters, but it doesnt mean they are evil. This is the second book in the series, but it is stand alone enough to follow along with no problems. With well rounded characters, a well developed world, villains that really have bite and some serious snark, this is a must read for any fans of Urban fantasy.

As far as narration, Doug Tisdale Jr. does a great job with the material, keeping the narration flowing and bringing the characters to life. He is quickly rising in my list of top narrators.