The Bookwyrm's Review of Ravine of Blood and Shadow by D.P. Prior 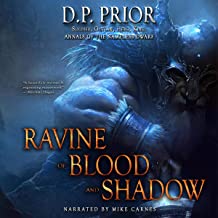 I've been having a really good run of books lately. Ravine of Blood and Shadow is just the latest of exceptional fantasy books I've read lately. Starting off in a fairly traditional fantasy manner, the book starts to take some twists and turns until it just goes down some really crazy paths to reach its unique conclusion.

Arx Gravis is the hidden ravine city of the dwarves, their last refuge with the fall of the great dwarven kings and their great city. The city is now run by a council who has one main rule, strictly enforced: No contact with the outside world. Anyone breaking this rule is subject to death. The ravine guards protect the ravine from outside treats, and ensure no one leaves, as well as enforces the laws in the city. Carnac Thayn, called Carn, is an officer in the guard, and comes across a murder in the scriptorium, the first in as long as Carn, 160 years old, can remember. He ends up chasing the murderer, a Fein, which is another subterranean race not seen in years, until it escapes into the lake at the base of the ravine.


This creates a lot of tensions, since the ruling council doesn't want to believe the dwarves are at risk. They are already massively isolationist. The threat of outsiders is just too much to bear. Carn's mentor, the leader of the Ravine Guard, Thumil, sets more guards to watch for a repeat. Meanwhile, Carn's brother, a scholar, is convinced through his studies that the lost axe of the dwarven kings is what is needed to protect Arx Gravis. The only problem is that if it exists at all, it was lost outside the dwarven realm on an exploring mission, and it's death to even go looking for it. As tensions within the city rise between various factions, Carn has made enemies with elements within the Black Cloaks, the ruling council guard force.

After one of the Black Cloaks attempts to murder Carn, and gets killed instead, Carn goes on the run, discovering his brother has left the city to find the lost axe, which determines where Carn goes. Leaving through the hidden exit at the bottom of the ravine lake, Carn is one step ahead of the Black Cloaks, travelling through the strange underworld following the trail he hopes will lead to his brother. Fighting Black Cloaks and escaping again, Carn arrives at the lowest level and finds his brother. He also discovers the lost axe of the dwarven kings there as well, guarded by stone golems.

Things don't go how Carn hopes, though, as the Black Cloaks attack when they arrive, and Carn's brother pays the price. The guards have their own surprise though, when the golems attack them and they find out what being on the wrong end of stone giants is like. Carn manages to get the axe and escape. Returning to Arx Gravis, Carn sees the city has been overrun with demons, and he goes into a berserk rage determined to destroy them all. Everything isn't what it seems, though, and Carn may pay the ultimate price for this discovery.

I was amazed at how much character building was built into this story. The family ties, how they interact is all worked into the story in intricate ways. Carn is obviously given the most attention, and you really get a peak in his head and into his motivations, as well as seeing how he reacts to triumphs and failure. The secondary characters are given some attention as well, rounding them out as much as possible. The more villainous characters are given realistic motivations, whether they be jealousy, greed or just a sense of xenophobia according to their natures.

The world building is excellent. The hidden city of Arx Gravis is fully realized, with excellent descriptions of the nature and shape of the city. You get a real feeling of being in the city carved out of the ravine, hidden from the rest of the world. Its easy to see how the city can remain hidden based on the descriptions, being a xenophobes dream.

I wasn't real familiar with Mike Carnes before I listened to this, but I have to say, I was very impressed. He does such a great job of bringing the characters to life, infusing them with their own voices and personality through use of different tones and registers, really differentiating them. His narrative pacing was outstanding, moving the story along and sinking into a monotone. I will definitely be giving his other work a look.

You would think every kind of story about that old fantasy standout, the dwarves, had already been told. Books like this prove that's not the case. Characters like Carn and Thumil just aren't Gimli knockoffs. They, and the others, have their own distinct society and personalities, and you really get into the storytelling aspects of the story. The loose ends were tied up, but there is definitely more story to tell down the road, which I will definitely be reading and reviewing.